To claim your discount, join Motorsport UK and log in to the member portal. 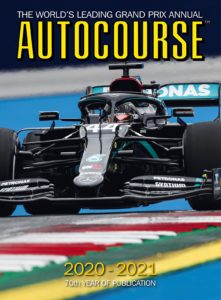 With Pandemic closing all motorsport activity in the first half of the year, The condensed schedule for the 17-race Formula 1 World Championship season is covered in its usual full depth, with hugely experienced paddock insiders Tony Dodgins and Maurice Hamilton dissecting the drama and intrigue that are intrinsic parts of any F1 season. Their race commentaries are complemented by detailed results spreads, including lap charts and tyre strategies.

Mercedes-Benz again proved the class of the field, with Lewis Hamilton, backed by the experienced Valtteri Bottas, bidding to win his seventh world championship,

Ferrari’ found themselves uncompetitive and Charles Leclerc, and Sebastian Vettel struggled to find the speed that made them winners in 2019, and it was left to  the ever-resourceful Red Bull Racing, with the exciting talent of Max Verstappen, to rise to the challenge and further justify their decision to switch to Honda power.

Below the top three teams, Renault at last looked like they’re returning to past glories while locked in battle with McLaren and Racing Point for fourth place in the constructors’ championship.

Highly respected Mark Hughes looks at the technical developments behind all the competitors in his team-by-team review, enhanced by Adrian Dean’s beautiful F1 car illustrations.

In addition to Formula 1, the sport’s other major categories are all afforded ample coverage. The Formula 2 and Formula 3 championships, key rungs on the professional single-seat ladder, are chronicled, as is the rise of Formula E, which is rapidly gaining considerable support from major manufacturers.

From the other side of the Atlantic, Gordon Kirby provides his usual insightful analysis of the US racing scene which majors on the compelling action of the ever-growing Indycar series and the gruelling NASCAR series.

AUTOCOURSE provides the most comprehensive record of the year’s sporting action, complete with results, published anywhere in a single volume. It is required reading for motor sport fans the world over. 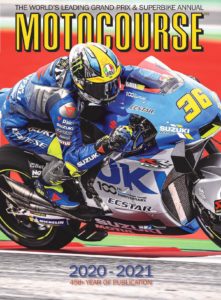 MOTOCOURSE 2020-2021 celebrates its 45th year of publication – and despite the World pandemic throwing the sport into chaos, what a year it was for motorcycle racing!

In a thrilling MotoGP season, Marc Marquez and Honda were expected to be the dominant force once more, but an accident in the opening round saw him side-lined for much of the season and left him with but a slim chance of retaining his MotoGP crown. Other riders stepped up in his absence and shared out victories. Ducati’s Andrea Dovizioso, and Yamaha’s trio of Maverick Vinales, Fabio Quartararo and Franco Morbidelli all took to the top step of the podium. The emergence of KTM as a race winning machine saw both Brad Binder and Miguel Oliveira join the list of first time winners as well as Suzuki’s Joan Mir, in a close fought battle for supremecy throughout the whole of the MotoGP field.

Once again, Valentino Rossi defied the years to remain at the sharp end of the grid, whilst the Suzuki pair of Alex Rins and Joan Mir both looked equally capable of adding to the list of winners in an enthralling contest for the title.

Editor Michael Scott provides a no-holds-barred assessment of all the aspects of a compelling season’s action.

In World Superbikes, Kawasaki’s dominance was challenged by Ducati’s Scott Redding, with Jonathan Rea looking to retain his championship title for the sixth successive year, ahead of the chasing pack including Alavaro Bautista, Chaz Davies and Yamaha’s Michael van der Mark.

No book covers the motorcycle racing world in as much detail as MOTOCOURSE, which, in addition to the two major world series covers The World Supersport Championship, The British Superbike Championship and the AMA USA Superbike series.

Incredible value for money, with 304 large-format pages, bursting with over 450 stunning colour photographs from the world’s finest photographers, MOTOCOURSE covers it all. No wonder MOTOCOURSE is regarded worldwide as ‘The Bible of Motorcycle Racing’.

Get Started in motor sport