Motorsport UK Academy graduates Elfyn Evans and Scott Martin stormed to victory at the Secto Automotive Rally Finland on Sunday afternoon. They survived the intense pressure from Hyundai Motorsport duo Ott Tänak and Craig Breen to triumph by 14.1-seconds and become the first British crew to win the rally. The Welshman keeps his hopes of a maiden FIA World Rally Championship title alive as he reignites his battle for the crown with two rounds to go.

Elfyn charged from fifth to first with a series of five back-to-back speed test wins on Friday night and Saturday morning, then was never headed and secured maximum points by also winning the closing Wolf Power Stage. Nothing less than victory would suffice in his title quest, his second victory of the season and the fifth in his WRC career, slashed his teammate Sébastien Ogier’s championship lead from 44 to 24-points. He also preserved his Toyota Gazoo Racing team’s unbeaten Rally Finland record since returning to the WRC in 2017.

The championship’s fastest roads provided tremendous action against the backdrop of stunning autumnal colours in the forests. Both Tänak and Breen led on the opening day in a furious battle, but ultimately, they had no answer to Elfyn’s pace. And despite an overshoot at a junction on Sunday morning, the Irishman bagged his third podium from his last three outings and matched his 2016 results. 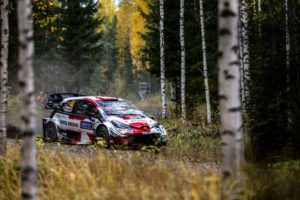 Elfyn is downplaying his championship title chances despite the drive of his life. He said: “I don’t think too much about it, to be honest. It’s definitely moved in the right direction, but it’s still a long, long way away. We knew it was a very remote chance after Greece, and it’s not much of a better chance now.

“But it’s moving in the right direction. At the end of the day, we have to just go to the next two events that are left on the calendar and give it our best shot and get the best results we can. That’s all we can do.”

The WRC returns to asphalt for the penultimate round at RallyRACC Rally de España on 14-17 October.