Inside Revolution: How To… Organise a Club Tour

In a follow-up to our recent feature on Touring and Regulatory Rallies (August 2022), the latest edition of Revolution is a guide to help clubs run their own tour events.

Tours are popular events for many clubs and their welcoming and relaxed nature makes them one of the best ways to open the door to new members. However, the apparent enormity of the organisational task involved can be daunting enough to put many off running them.

What makes a good event?

It is the same as any kind of motoring event, if you give entrants what they want they will keep coming back year after year. For a tour, that first and foremost means a good route. The Rose and Thistle, for example, operates in north Cumbria so the organisers can run their routes into many attractive areas, across the border into Scotland, into the Lake District, the Durham Dales, Northumberland, and the North Yorkshire Moors.

How do you pick a good driving route?

It sounds obvious, but it is important to have a good choice of roads and scenery. Often, routes that have been previously used on road rallies can work well as many of them can be ideally suited for the more relaxed tours.

How do you start putting together an event?

Planning a tour often starts six, or even nine months, before it is due to go ahead. Typically it begins with a decision on the geographical region to be visited and whether it will be a one day or multi-day format. Choosing the venues for the start, lunch and finish is the next priority along with a consideration to fuelling, with a petrol station ideally near the start and at one point en-route.

It is crucial to choose appropriate venues based on the numbers you expect to attract – for example, The Rose and Thistle usually generates up to 80 entries, so that makes for 160 crew. Venues must be capable of handling these numbers both in terms of space and food service. It is good to arrange a firm booking five to six months in advance, and this also helps to secure a good price.

Having confirmed the venues, it is then a case of ‘joining up the dots’ by selecting the quietest and most interesting yellow ‘C’ and brown ‘B’ class roads and dividing the mileage between morning and afternoon runs. Around 120 to 150 miles is usually the target for a single day.

How do you know it is a good route?

You should always drive the route to get an accurate feel for the roads, as this is something that GPS based planning can never do. This is also an important exercise to carry out to create a simple but comprehensive tulip based road book (see Revolution, August 2021, for more about these), which must include correct inter and cumulative mileages measured from a Brantz trip meter or equivalent.

How do you get a route approved?

The route should be submitted to the relevant Route Liaison Officer for comments and observations at least two months in advance of the event. A Waiver of Permit should also be obtained from Motorsport UK. 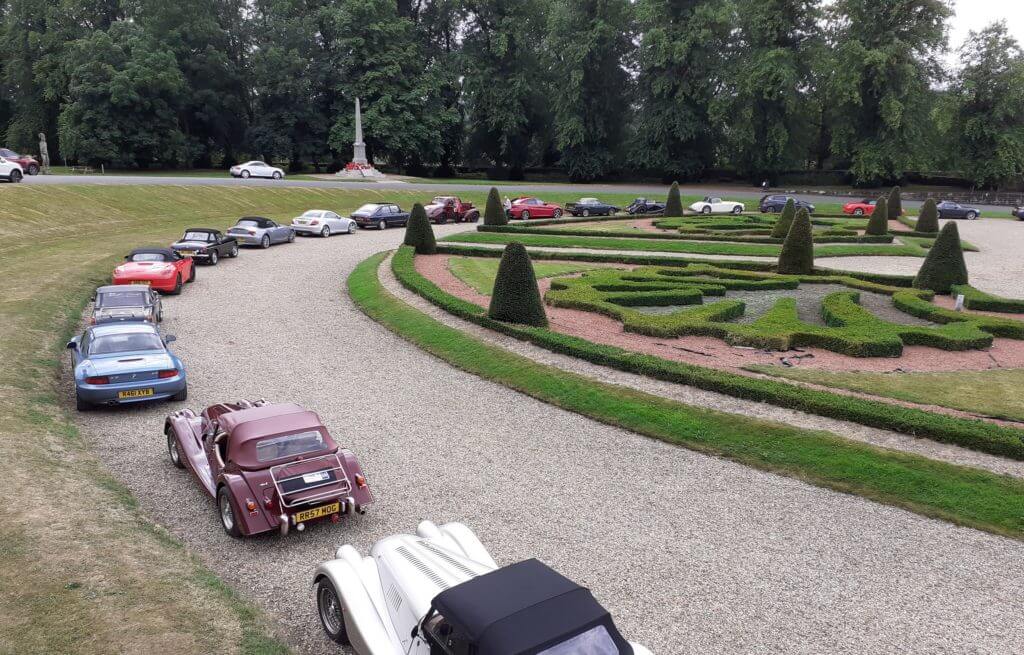 The Rose and Thistle tour stops for lunch at Parterre, Bowes Museum, near Barnard Castle.

Many one-make clubs run tours, but the advantage of a typical Motorsport UK club is the rich variety of cars – in age, makes and models – that can take part in a tour. Many entrants are lifetime motoring enthusiasts with experience of competitive races and rallies, and tours create a natural stepping-stone after competing. Tours are also great to encourage younger entrants along, with virtually any type of car, with the proviso, of course, that they drive with care and consideration for others.

How do you encourage people to enter?

Use your network and email regulations and entry forms out well in advance to get the maximum support from your club regulars. Using this approach, The Rose and Thistle typically secures early entries within days, and last year the limit of 80 cars was reached weeks ahead of the closing date. It is also worth allocating a list of reserve spots, however, as there could be late withdrawals.

What do you need to communicate with the participants and when?

Final instructions and the start list should be emailed the week before the event. On some events there is a case for seeding the oldest cars at the front, but often starting cars in the order entries are received can be an incentive to enter early. 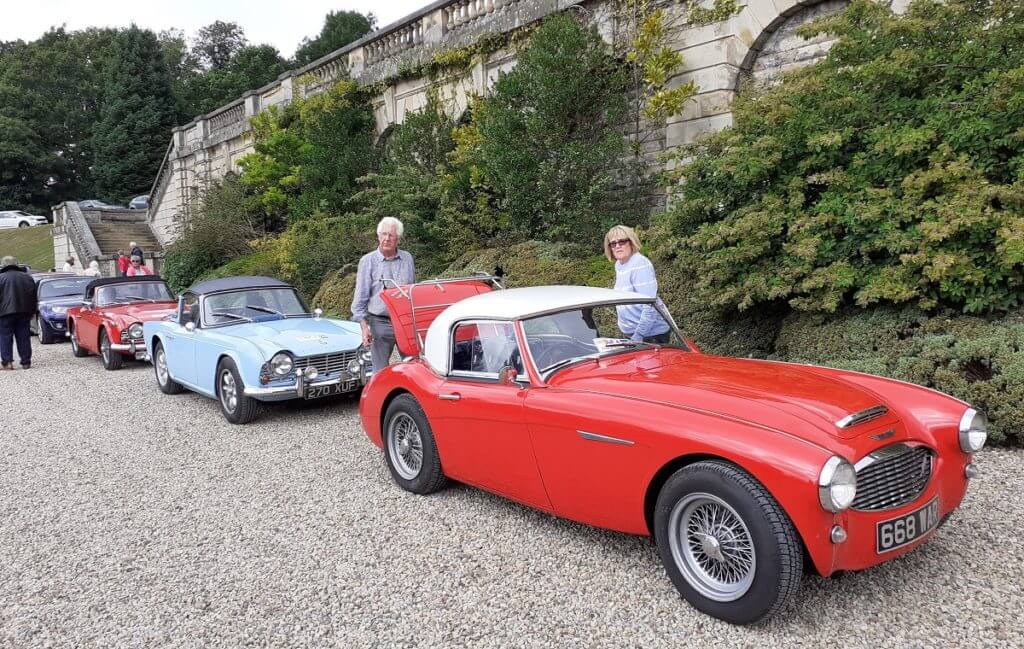 What do you need to do on the day?

At the start of the day, crew members should be asked to fill out Motorsport UK signing on forms. They should also be handed an envelope containing the route instructions, road book and an adhesive event plate containing the entrant number. The information provided should also include the mobile phone numbers of the organisers in case of emergencies and you may also want to include a memento event plaque as well as meal tickets to exchange for food and beverages at each venue, if this has been arranged.

What is the start protocol?

There is no set format, but a good approach is to start cars at one-minute intervals, giving time to take pictures of the cars and crew where possible.

How much should it cost?

A one-day tour of 130-150 miles, with three snack meals included, is typically £60 per car, based on Wigton MC’s events.

What can go wrong?

Local authority road closures can often cause havoc with event planning as they can pop up anywhere without notice and can cause confusion to newcomers. To avoid any issues, you should advise participants to take a map covering the route to enable diversions to be made.

Also, particularly in recent years, Wigton MC has sometimes found venues that had committed to a discounted long-term booking displaced their event by a more lucrative booking. It’s tough, but the economics of the hospitality industry can be demanding. 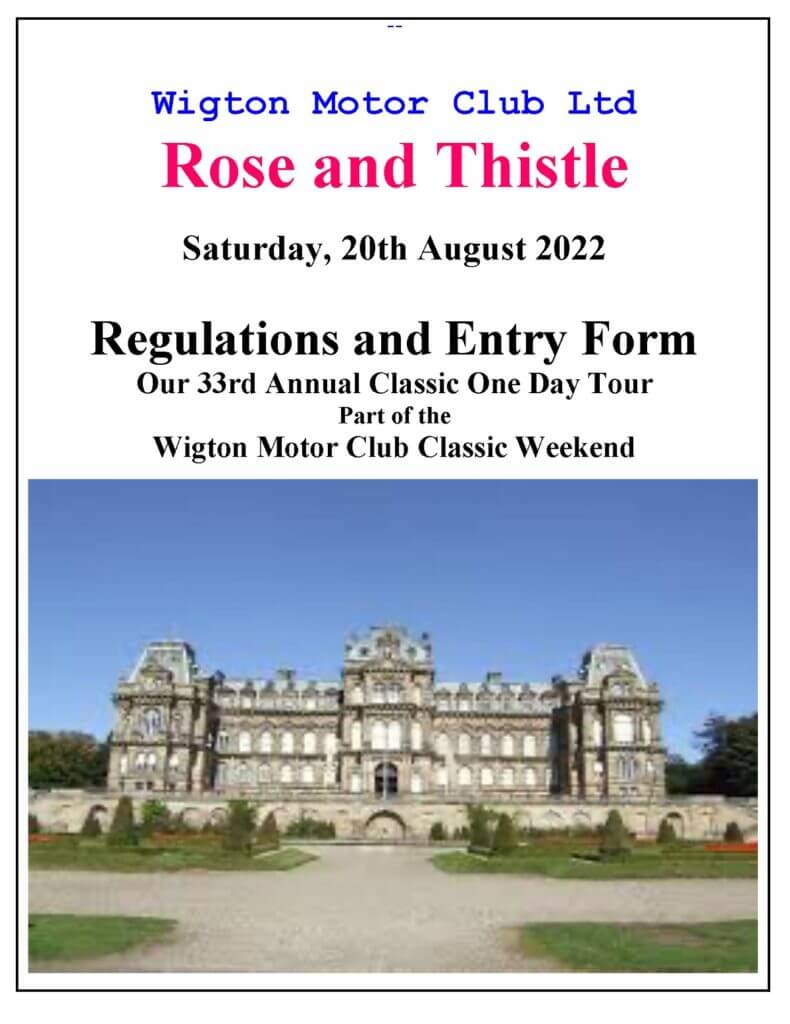 The Rose and Thistle Tour book