Motorsport UK will introduce ground-breaking changes to the current Karting pathway, including the introduction of a new ‘Inter’ category, adjustments to the age eligibility for competitors and technical changes in the United Kingdom from the start of the 2023 season.

Designed to offer both greater access to the sport and provide manufacturers with an opportunity to develop new equipment and technologies, the changes include a reduction in the minimum age requirements for the Junior category by a year, provided the competitor is in possession of a National licence.

Cadet karts will be brought in line with the global karting community with the adoption of a 950mm, Motorsport UK-homologated chassis, and a new ‘Inter’ category will be introduced from 2023, positioned to bridge the gap between Cadet and the Junior category, offering a more linear progression through performance and size.

The ‘Inter’ category will use the same 950mm chassis as Cadet, but with an increase in power and more grip. These changes not only bring the UK closer in line with the rest of the global karting scene but will also make progression easier for competitors moving through the pathway. Any existing 900mm chassis will remain valid for use at Club-level Cadet events for the remainder of its current homologation approval.

In the sport’s continued race for sustainability, Bambino karts will have the option of using electric powertrains from 2023. Petrol engines will still be permitted with gradual targets introduced to switch from traditional to sustainable synthetic fuels in the coming seasons.

In the Cadet through to Senior categories, Motorsport UK will invite the application of new engine and powertrain variants for homologation, starting from the 2023 season, as the UK continues to thrive at the cutting-edge of technology at this level of the sport.

The changes follow a comprehensive review of the current kart class structure, which started in 2019 and utilised feedback from nearly 700 members across a broad spectrum of the existing Karting community. The review was carried out in conjunction with the relevant class stakeholders and an extensive analysis of the current global regulations for Karting was undertaken by Motorsport UK. 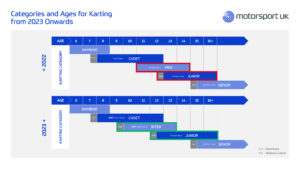 Hugh Chambers, Motorsport UK Chief Executive Officer said: “It has been clear for a while now that the karting pathway in the United Kingdom, whilst continuing to thrive in the present, also needs to look towards the future.

“After an extensive period of review and consultation, these changes will bring the UK in line with the global standard for karting in terms of regulations, technology and with an improved pathway for competitors to progress through the different age categories.

“By planning a year in advance, it also gives manufacturers and suppliers plenty of opportunity to start developing new technologies for the market, ensuring the transition will not only be as smooth as possible, but hit the ground running.

“Everybody in the organisation looks forward to the introduction of these changes and a healthy, prosperous future for the karting scene in the UK.”

Dan Parker, Motorsport UK Karting Manager said: “The 2023 restructure of the current kart classes represents some of the biggest changes in the sport for over 20 years – the changes follow an extensive review into the sport over the last three years and reflects the current landscape globally for Karting.

“We are moving the sport further in-line with the global regulations reflecting the feedback from our members and the current class stakeholders, whilst still acknowledging the successes of our own “British” classes such as the current cadet class which will continue to be eligible for use at events

“The sheer number of responses we received to the proposals show the importance of the changes. We are delighted that the feedback was in favour of all of the of the proposals, with a support rate of around 75% for most aspects.

“We will almost certainly see new products on offer from various manufacturers in 2023 and this will give our members and clubs the choices that they have requested in terms of the equipment that can be used at every level from club racing up to the British Championship.”