Motorsport UK and the All-Party Parliamentary Group for Motorsport today presented Our Eclectic Future at British Motorsport Day in the Palace of Westminster to showcase the vision of a world powered by a range of use-appropriate systems and fuels.

Fossil-fuels will continue to power existing vehicles around the world for quite some time, and therefore solutions are needed to shift to alternative net zero fuels, as well as new technologies that promise a cleaner and more sustainable future.

At the start of British Grand Prix week, Motorsport UK held a vehicle display in Speaker’s Court within the Palace of Westminster, and a reception in Speaker’s House with key motorsport officials and parliamentarians in conjunction with Mr Speaker, The Rt Hon Sir Lindsay Hoyle MP.

The vehicle display demonstrated the innovations of motorsport engineers who are pioneering new forms of propulsion to meet the challenges of climate change by creating an eclectic range of solutions. It forms part of Motorsport UK’s wider sustainability strategy which emphasises the need to utilise technology to accelerate the development and demonstration of low carbon solutions within the sport. Click here to view Motorsport UK’s Sustainability Strategy.

Hybrid technology and battery electric technology are already a presence on UK roads, while others such as sustainable fuels and hydrogen are yet to be made more widely viable for consumers. However, all four technologies feature prominently in the world of motorsport and are being developed at pace. The continued innovation of these technologies can ultimately benefit the wider automotive sector, as motorsport technology transfers to road cars.

The vehicles on display showcased the technology in action at various levels of motorsport. They included:

Alongside learning about the vehicles, parliamentarians had an opportunity to meet Steve Sapsford, Managing Director at SCE, an automotive industry expert on future propulsions systems and the role sustainable fuels can play in powering the large number of existing international combustion engine vehicles that are already on the road. He was joined by Paddy Lowe who, following technical roles within Williams, McLaren and the Mercedes-AMG PETRONAS F1 Team, founded and is now CEO of Zero Petroleum.

Sapsford presented the scientific data behind Our Eclectic Future explaining that life-cycle analysis shows that battery electric vehicles are part of the solution. They are ideal for inner city urban environments that require zero emissions at point of use, but they are not in fact zero emissions either in terms of lifetime impact, or daily use unless the electricity sourced is itself 100% renewable. This is outlined in the graph below: 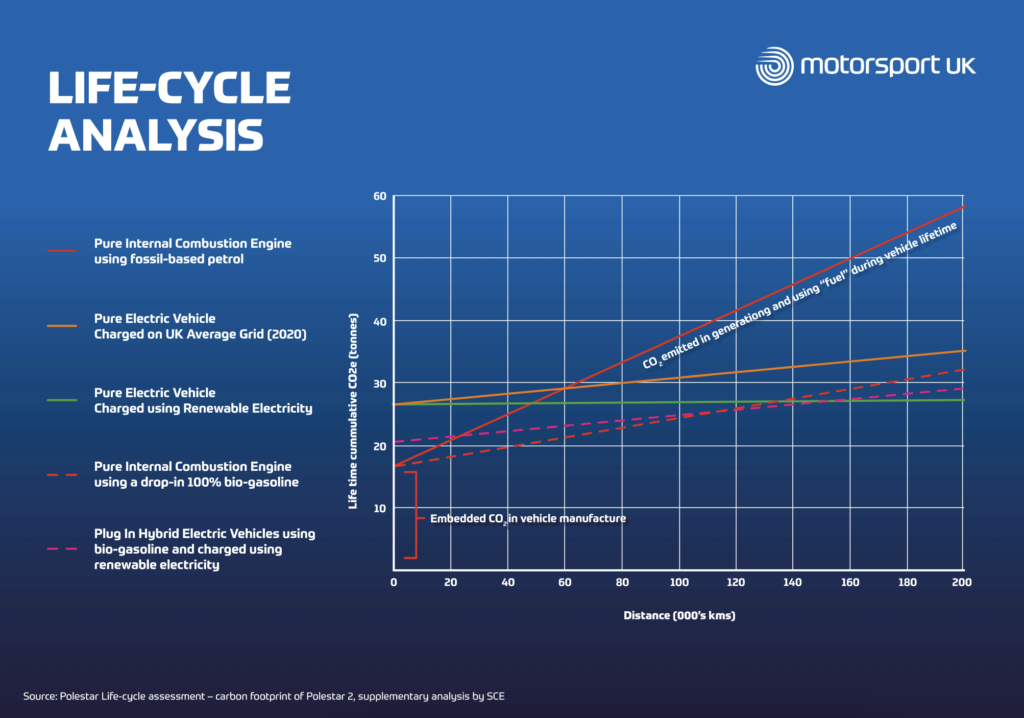 Sir Lindsay formally welcomed MPs, Lords and members of the motorsport community in Speaker’s House at the Motorsport UK and APPG Motorsport reception.

Richards emphasised the power of motorsport to influence consumer purchasing and therefore the role that the sport has to play in encouraging consumers towards more sustainable technologies. He noted that few industries contain so many highly-skilled engineers who are all motivated to continue innovating and pushing boundaries when it comes to creating sustainable solutions.

Lowe demonstrated how he puts this into practice, as the widely renowned former Formula 1 engineer explained that synthetic fuels are going to become ever more widely available with cost and scale becoming concerns of the past.

The Formula 1 boss then emphasised that the series has created the world’s most efficient hybrid power units – technology which can only benefit consumers in the wider automotive sector as the best elements are extracted from Formula 1 and into road cars.

Allison reinforced Domencali’s point, noting that the Mercedes-AMG High Performance Powertrain featured in the team’s Formula 1 car is the first to reach 50% thermal efficiency – meaning it extracts more power from gasoline than ever before. Allison confirmed this technology will transfer to the company’s road car with the Mercedes-AMG Project One featuring a version of this engine.

“If the world is to avoid the serious effects of climate change, then we must consider what the future of mobility looks like for the automotive industry.

“Motorsport has the power to influence the hearts and minds of consumers. Time and time again motorsport has seized the opportunity when it comes to innovating new technologies that transcend into the wider automotive industry, delivering benefits to consumers globally.

“Motorsport engineers are pioneering both new and existing forms of propulsion to meet the challenges of climate change by creating an eclectic range of solutions.

“Fossil fuels will continue to power existing vehicles around the world for quite some time. As the long-term reliance on hydrocarbons begins to shift, hybrid technology, sustainable fuels, battery electric technology and hydrogen technology can provide a solution to a variety of transportation needs.

“The future of mobility relies on these methods of propulsion being promoted equally to showcase that our future is not solely one form, it is all of them working together to provide a sustainable future for the mobility and the motorsport community.”

The Rt Hon Sir Lindsay Hoyle MP, The Speaker of the House of Commons, said:

“I am sure British fans will be focused on this weekend’s legendary Silverstone Grand Prix to see if Hamilton’s podium finish in Canada is a sign of more to come from him and his Mercedes team.

‘”It was interesting to hear how motorsport engineers are introducing new technology to help the wider automotive world tackle climate change.”