Run what you brung!

To read more features like this, make sure you read our latest edition of Revolution Magazine here

There are many motorsport disciplines out there to test your mettle as a driver without wiping out your life savings, many of which you can actually enter with your everyday road car.

Along the way, you can get to know the many local enthusiasts and motor clubs who keep these grassroots activities alive. These accessible forms of motorsport are also perfect when, for whatever reason, the time or budget for more committed forms of competition are not forthcoming, be that at the start of your journey or after family or career have intervened. Rally driver Richard Felgate is a typical example, having got the bug for motorsport from these more informal events.

“I started off as a lot of people do, converting my normal road car into something I could use for road rallies, clubman events, autotests, and autosolos. Primarily, I wanted it to be manageable from a cost perspective and it also meant I had a car that could be multi-purpose. I was unable to afford a second car, so I started out on events that were cheap.”

This opened the door to more serious competition, a recent break meaning he is now coming full circle and dabbling in a few autosolos to see if that is enough to scratch the competitive itch, or if he once again wants to go all-in with the stage rallies. Whatever your level, though, he reckons it is a great way to get your skills up to scratch. “They are brilliant for car control,” he muses. “If something happens when you are flying through a forest, you will be glad of that time when it happened between a couple of cones, because you will probably save the car!”

It does not get much cheaper than autotests and autosolos. You can enter a completely standard road car, and you do not even need to wear safety kit to compete. Motor club membership is required but that can be as cheap as £5 per year, and entries cost from £35 for a full day. You will need a free RS Clubman competition licence to compete. Winners exhibit otherworldly car control, the idea being to get around a low-speed circuit, often marked with cones and memorised by the drivers, as quickly as possible. You will rarely venture out of first gear and will make good use of reverse, as well as your handbrake. There will be several tests in an event, with drivers getting two shots at each, and the winner being the competitor who covers all of the challenges in the lowest accumulated time. You accrue time penalties for hitting cones, not stopping on a line, or for getting lost on the course.

Autosolos are the same, but on simpler courses and without reverse-gear sections. Motorsport UK Autotest Committee member, Steve Johnson, advises what sort of people you would expect to see at an autotest or autosolo event. “14 to 85 years old, male and female – three generations sometimes!” he laughs. “Autosolo and production car autotests can allow 14-yearolds to drive with a passenger who holds a driving licence and has experience in the sport,” Johnson continues. What better way to get the whole family into motorsport? If you are tempted, just be mindful of tyre wear on abrasive surfaces – many competitors carry a spare set of wheels and tyres to ensure they can legally drive home after the event.

Sprints are high-speed events, often held on race circuits but also marked out on open spaces such as airfields. You are usually allowed two runs to set the fastest time around the course, and it is possible to enter a completely standard road car. You will need basic safety clothing (helmet and fireproof overalls), which is probably the biggest cost at the outset. Hill climbs are similar, but typically held at dedicated venues on short, narrow, and twisting courses with entrants getting a minimum of two runs to set their best time. In both cases, there are classes catering for road cars, but you will need a few basic modifications according to Motorsport UK regulations.

These include a sticker on your ignition key showing which way to switch off, a yellow battery earth cable (this can be taped over), a race number on both sides, and a timing strut on the front end. You will also need to join a club and hold an RS Interclub competition licence. For those wishing to venture off-road, autocross is a ‘speed’ event taking place on grass or stubble fields. The aim is to make your way around a temporary course as quickly as possible. Classes are determined by engine size, and, to enter a standard road car, you will need a fixed fire extinguisher and mud flaps behind each wheel. Helmets and fireproof overalls are mandatory.

Unlike many of the disciplines in this article, car trials are all about the distance you (and your optional passenger for balance, stability, and traction benefits) travel over an off-road course, rather than how quickly you go. There are classes of trials catering specifically for standard road cars with no additional safety kit required. And you can be remarkably successful, as Barrie Parker, British Car Trials Champion and member of Motorsport UK’s Trials Committee, has proven. “Over the years I have won the BTRDA and Motorsport UK National Championships in standard cars, including an old Mini Cooper S, Peugeot 104, Peugeot 205 XS, Citroën AX GT, and Toyota MR2.”

All that is allowed in the ‘standard’ car class is a spare pair of wheels with the chosen tyre, taken to the event, and fitted there for the day. Call it £100 for the sake of argument, and perhaps the same again for a sump guard and/or underbody protection weighing not more than 10kg. So, car preparation costs are low and so are entry fees. “You will be competing all day,” says Barrie. “Consequently, it is very good value for money at £30-£35 per event.” To enter you will need a free RS Clubman competition licence and to be a part of a motor club.

Another option, if you are among the many drivers with an SUV or 4×4 at home, is to compete in a tyro trial, taking place on off-road courses with stages of up to five minutes at a time. You will get six to eight runs in a day. Tyro is a great way to get the family involved, as Andrew Flanders, a long-serving member of Motorsport UK’s Cross Country Committee, explains. “We can actually teach people to drive,” he says. “13-year-olds can do this, as long as their co-driver is someone who has done this sort of thing themselves before.

We often use automatics, which makes offroad driving that much easier.” The courses are relatively gentle and designed not to damage your vehicle. “We are only allowed about 100mm of water and one-in-30 slopes, not the hardcore one-in-one gradients found in some other disciplines,” Flanders explains. Popular vehicles for taking part include the inevitable Land Rover Defenders, but also ‘soft-roaders’, such as earlier Freelanders, Discovery 1 and 2s, Range Rovers, and the various Japanese alternatives like Suzuki Jimnys.

In all cases, suitable turn-key cars can be bought for a couple of thousand pounds, with no modifications required. Equally, if you fancy getting mud on the tyres of your family SUV, you would be welcome to give it a go! Stages are marked out by gates, and the further you progress through each section without hitting a gate, the lower your penalty will be. Entry fees are approximately £30 for a day, while motor club membership will cost around £20-£30 per year. Once again, an RS Clubman licence and membership of your local club are all you need beyond that. 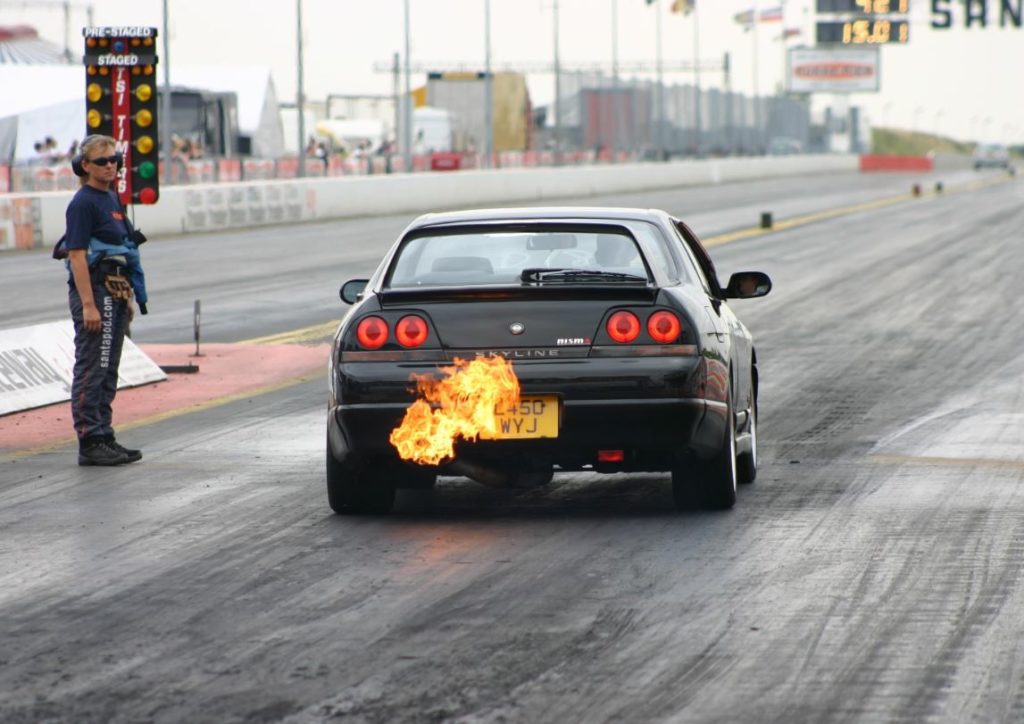 Affordable motorsport is not just about flinging a car quickly around corners or up hills. There is a healthy drag racing scene in the UK, and strips such as the famous Santa Pod in Northamptonshire offer Run What You Brung events where you are allowed to enter your standard road car and see how quickly it can cover the famous quarter-mile. You will need lightning-fast reactions and fabulous hand-eye coordination to get the lowest time and highest terminal (top) speed you can. Just £35 buys you unlimited runs in a day, each with a printout showing your reaction times to the start lights, 60ft, 1/4 mile, 1/8 mile times, and terminal speed. No licence or extra kit is required.

If you fancy getting out and using your car but do not want to thrash it to within an inch of its life, a touring assembly could be just the ticket. These navigational events typically run through picturesque routes, punctuated by checkpoints where marshals stamp your route book. You take a navigator, and there are clear rules about distance and average speed, in deference to the fact that you are driving on the public road. The emphasis is on a sociable day out rather than going hell for leather.

Great, so what do I do now?

Now that we have gone through the options, you are bound to want to know more, in which case the best plan is to contact your local motor clubs and see what sorts of events they offer. Pop along to a club night and get involved, hear some stories, and ignite that fire within yourself. What do you have to lose?

INSURANCE NOTE If you are driving on public roads, you need to have the correct insurance cover, and many regular policies specifically exclude motorsport events – even if just driving between stages. Some will ‘top up’ your cover, for an extra cost, of course. Ensure you have done your research before you get started.