From private competitor and factory driver to team owner and company boss representing Ford’s rally presence at all levels of the sport, it is fair to say that Malcolm Wilson and M-Sport have achieved a lot over the years. There has, of course, been success on the track, too, building and running cars for Bentley’s GT3 programme and doing the same for Jaguar’s one-make electrified I-Pace eTROPHY, which ran in support of Formula E. This latter experience will help inform the next step in the company’s evolution, and that of the sport in general, as environmental sustainability becomes an ever-greater consideration for the manufacturers participating in it. This goes beyond the hybrid systems M-Sport is creating for rallying and the Kwik Fit British Touring Car Championship (BTCC) and into broader themes of how a British-based firm like M-Sport can contribute to the wider success of the motorsport industry and investment in skills, technology and people to futureproof it through a period of technical upheaval. Wilson tells us more about what electrification and hybridisation mean to both the sport and the industry in which he has made his name, and the opportunities it represents for sustaining the UK’s global position as a centre of motorsport expertise.

It was only going to be by having some form of hybridisation in the World Rally Championship (WRC) that Ford was going to continue to invest at the level we’re at, and with the way they and all manufacturers are moving to full electrification it was essential we got hybrids into WRC. That will no doubt follow down through the other categories in the future but it’s a big learning curve for M-Sport. Obviously, we have experience of electrification through Jaguar’s one-make race series but the rally environment brings up completely new challenges.

I’d like to think because we’re agile as a company that will play in our favour, as it did when the new generation of World Rally Cars came in 2017 – we’ve always developed winning cars out of the box but I have to say that without the back-up and resource of Ford in the US it would have been a completely different story. With technology like this we don’t have the same resources as the other manufacturer teams, so it’s crucial to have that link with an Original Equipment Manufacturer (OEM) to optimise the hybrid system. 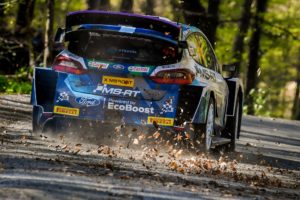 In terms of what it means for the WRC with new hybrid technology, honestly, it’s a game changer, it’s going to be a new dimension for everyone. From the early feedback we’re getting, and the opportunities through regulations set by the FIA, it’s going to mean a lot of pressure on the driver to maximise and optimise when they deploy the hybrid system because we’re looking at a significant increase in power for a certain period of time. If you’re not deploying and re-generating at the right moment, you’re not going to get results, and you will need intelligent driver and co-driver combinations with a lot more emphasis on how they recce the stages to identify the best opportunities to use the hybrid power.

The drivers are, of course, currently prioritising the results they need to get this year, but at some point they will be involved from the testing side. There will be a lot to learn, but we’re also working very closely with Ford in the US – they have a hybrid unit there and we’re doing a lot of simulation and modelling to get the best results out of it.

Working on the Jaguar I-Pace eTROPHY was a great first step for us into electrification. What I immediately picked up on were the implications and consequences from the safety side, managing that and making sure we had all the right disciplines in place. That was the most important thing we learned because, no question, electrification is here, and is here to stay.

Whether all disciplines can be 100 per cent electrified is yet to be seen. Of course, we’re doing the base internal combustion engine (ICE) for BTCC from 2022 onwards and working with Cosworth with its hybrid system, so the fact we’re involved with different projects hopefully puts us and the wider industry in a good position for whatever else is coming.

Sadly, like everyone, we’ve all been through a very difficult time so it’s not the perfect scenario. We’re very fortunate that we’ve been able to retain the brainpower in the engineering and design team we’ve had for many years, so we’re pretty much up to speed. I just hope business starts to pick up and we can look to recruit more young engineers and apprentices.

In that sense, for young people, I think hybrids and electrification present tremendous possibilities from the technology side. Given the speed it’s happening, there’s a great opportunity for the younger generation (coming from a STEM education) to get involved, given there’s no question that electrification is going to play a major role in both motorsport and the wider automotive industry.

Personally, I’m more involved with developing young drivers but, from the engineering perspective, I have people in the organisation doing similar on their side. This is an important part of what we do – it’s always been an ambition of mine to create this ladder of opportunity through rally from the lowest categories all the way up to the next generation of World Rally Car. We’re the only manufacturer that has that, meaning an up-and-coming driver knows if they start their career in a Ford, they can go all the way to the top. 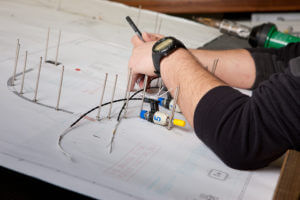 That structure means we can apply that same mindset with engineers, designers and technicians of course. We can bring people through the lower categories, see them develop and, at that point, you can very quickly see who can go up to the next level, and that’s something we will continue to do throughout the company. It’s important from the perspective of a local employer up here in Cumbria too – obviously, the type of specialist jobs we have brings in people from all over, but it’s probably something like 50 to 60 per cent locally recruited staff, and that trend is increasing.

Sustainability takes many different forms, but from the point of view of jobs and the industry, a bigger percentage of the 2022 car is built in collaboration with UK companies. A lot of that is probably due to Brexit making it more difficult to deal with companies outside the UK, so more of our work will be with locally-based businesses. There are other difficulties but, going forward, I think in terms of engineering and design the resources we have here in the UK put us in a very strong position.

Looking further ahead we’re already anticipating hybrids at other levels within rally and looking two or three years down the line to the Rally2 category but we need to fix some technical classifications. At the moment I think everyone is just looking forward to getting back to doing motorsport, so from a customer point of view it’s not a priority – they just want to be competing with the current product they’ve got. There are a lot of private people doing it for enjoyment and they’re not going to get any more fun out of driving a hybrid, but everyone understands it’s something we need to be going down the route of eventually.

Because the technology is moving so fast I think we will need a little time to reflect. The big thing we are looking at with the FIA – and we all need to be mindful of – is costs. For privateers, we certainly can’t be looking at anything like the expense encountered on the Rally1 car, so we need to be looking at systems on production cars. As such, I think it’s worth waiting to see what the OEMs come up with, see what the best systems are, the most cost-effective systems, the most efficient systems and how they evolve over the next two to three years.

In terms of fully electric, I’d say you can’t dismiss anything at the moment, but I can’t see how it would work within rallying as we currently know it. We may have to be prepared to consider changes to how we hold events, maybe more based in cities like Formula E with stages just outside towns. It would mean a complete change of face but, at the moment with the FIA, we’re looking more at what can be done with synthetic fuels because, as I say, I don’t believe every motorsport discipline can necessarily go 100 per cent electric. There are some where it can work – Rallycross is a perfect platform for instance – but for now hybrids are an important first step into making the sport more sustainable and using it as a platform for road car manufacturers to get that message to their customers.

This article was originally published in the May 2021 edition of Revolution magazine, Motorsport UK’s digital monthly magazine created exclusively for our community. Packed with the latest news and updates on the issues that matter to our members, you can read more on revolution.motorsportuk.org or download the app for Apple and Android devices.