The immense and far-reaching benefits delivered by Wales Rally GB have been highlighted in a new infographic depicting many of the widespread rewards generated by last year’s staging of the UK’s annual round of the FIA World Rally Championship (WRC).

Now that 2019’s final figures have been verified, it is possible to judge the full extent of the losses experienced in Wales following the enforced cancellation of this year’s planned event due to the COVID-19 pandemic.

Whether it is close to £10m of positive economic gains brought to the region or the dramatic television coverage showcasing Wales’ spectacular scenery and many adventure sports attractions to audiences in more than 150 countries, the WRC never fails to perform on many different levels.

Since the move to a new home in north Wales in 2013, the rally has also raised more than £250,000 for local charities and good causes while last year’s Llandudno-based event attracted – and inspired – many thousands of students studying STEM (Science, Technology, Engineering and Maths) subjects at schools in Conwy County and neighbouring shires.

Other significant numbers featured in the latest infographic include the rally’s massive global reach on its busy social media platforms as well as last year’s record attendance. In 2019 more than 100,000 visitors were captivated by the raw excitement generated by the latest breed of WRC cars crewed by the world’s best drivers drawn from no fewer than 27 different countries.

“Last year’s world championship rally was a huge success on so many different levels,” confirmed Hugh Chambers,Chief Executive of Motorsport UK, organiser of Wales Rally GB. “These cars are the fastest the sport has ever seen and, thus, in themselves an enormous attraction. This appeal, in turn, creates huge interest and substantial economic activity throughout mid and north Wales. Whether it’s hoteliers, shop keepers, garage owners or the many local business that play a vital part in the successful staging of a world championship event, there are so many winners when the WRC entertains in north Wales. Wales, too, is a big winner with its many attractions showcased to audiences around the world.”

Although the globetrotting series is currently on hold in response to the global COVID-19 pandemic with a number of worldwide rounds having been cancelled, a revised 2020 calendar has now been issued commencing with a new WRC round in Estonia in early September.

With the global economic outlook still unclear, plans for the 2021 championship are yet to be clarified. “A number of factors will determine next year’s WRC calendar but, for all the positive reasons outlined in these audited figures, both Motorsport UK and the Welsh Government, our principal funding partner, are optimistic that we will see the WRC back in the Welsh forests in 2021,” Chambers says. “This major event has a enormous economic benefit and drives people’s livelihoods. Its presence will not only generate a lot of excitement but will also play a significant role in the country’s post-pandemic recovery.” 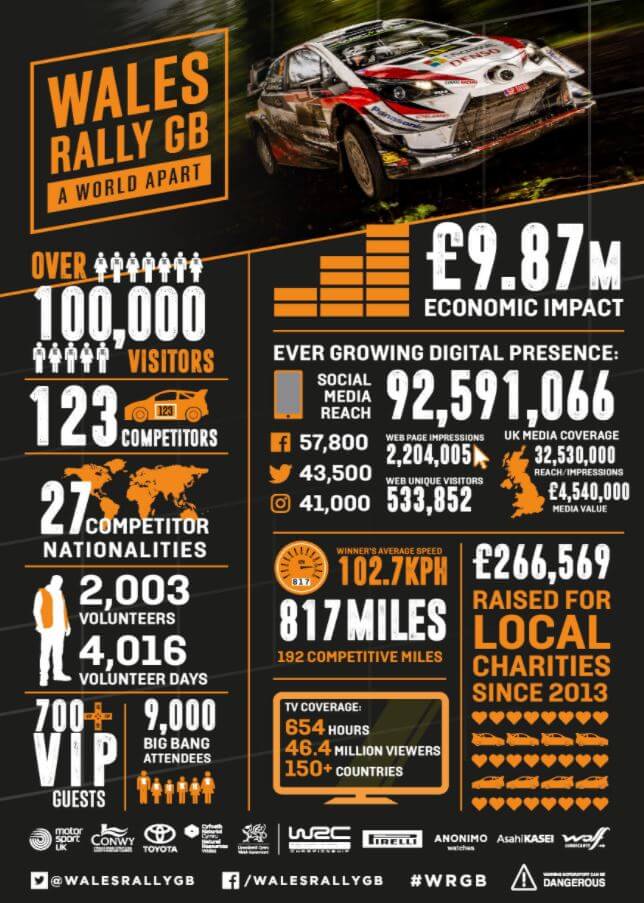