That first F1 World Championship was won by Alfa Romeo driver Nino Farina who went on to become the original F1 World Champion. Alfa Romeo are the only entrant on the grid for tomorrow’s 70Th Anniversary Grand Prix that were also at that very first race. 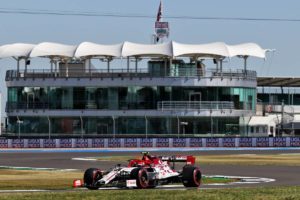 Britain’s Lewis Hamilton made history last weekend, becoming the only driver to have won his home Grand Prix seven times. Tyre-bursting drama on the last few laps saw Hamilton counting down the final corners, as Red Bull’s Max Verstappen set the fastest lap and ate into the Brit’s 30-second lead. Hamilton held on and crossed the finish line with a shredded front tyre. Mercedes teammate Valterri Bottas was not so lucky as his front left tyre burst, forcing him to the pit and finish outside of the top 10.

Bottas is back with a vengeance this weekend and will start tomorrow’s 70th Anniversary Grand Prix on pole. Hamilton will start in second position, with Racing Point’s reserve drive Nico Hulkenberg starting from third. Hulkenberg is replacing Sergio Perez who is missing his second Grand Prix after testing positive for COVID-19.

Following the British Grand Prix’s dramatic finish, a change in tyre allocation for tomorrow’s race will sees the teams most likely opt for a two-stop race strategy as they contend with softer tyres.

Tomorrow’s race is the 55th FIA Formula 1 World Championship round to be held at Silverstone, although this is the first time the Northamptonshire venue has hosted a round of the World Championship other than the British Grand Prix.