All-electric racing is to return to the capital later this month after a wait of more than five years when the ABB FIA Formula E World Championship stages Rounds 12 and 13 of the season on 24 and 25 July at ExCel London.

The emission-free Formula E single-seater cars have an exciting new home at London’s Royal Docks using a bespoke indoor/outdoor circuit – a world first in international motorsport. It will be the first major event to take place at ExCel London, since the venue reopened after supporting the capital as an NHS Nightingale Hospital during the pandemic.

Since the last London E-Prix in 2016, the championship has gone from strength to strength to a full Formula E grid featuring some of the biggest names in motorsport including British manufacturer Jaguar and German car giants Porsche and Mercedes.

Formula E has also received FIA World Championship status and become the first sport in the world to achieve a certified net zero carbon footprint since its inception.

The weekend will see competitors take part in two 45-minute, plus-one-lap races – both streamed free-to-air via the BBC digital platforms and across Eurosport – in what is the penultimate host city in the championship’s seventh season.

The event will also mark the first time Formula E’s Gen2 cars have competed on UK soil with the battery-powered machines capable of speeds up to 174mph and accelerating from 0-62mph in 2.8 seconds.

Heineken® will become the Race Title Partner of the 2021 Heineken® London E-Prix, underlining the company’s sustainability message and its commitment to responsible driving with a first-of-its-kind green innovation to be launched during the race weekend.

Seven of the 24 drivers will be competing on home soil that weekend with Sam Bird, Jake Dennis, Alex Lynn, Alexander Sims, Oliver Turvey, Tom Blomqvist and Oliver Rowland all hoping to make it to the top-step of the podium. Of these, only Sam Bird has won his home race – one of only two drivers to have ever done so – with the 34-year-old Dorset-based driver also the only one to have recorded victories in every season to date.

Meanwhile, two British teams – Jaguar Racing and Envision Virgin Racing – will also be on home turf for the event, whilst both the Mahindra Racing and NIO 333 teams feature all-British driver line-ups.

Designed by British architect Simon Gibbons, in cooperation with the FIA & Motorsport UK, the 1.5-mile circuit features 22-corners and two substantial elevation changes as drivers negotiate incline and decline ramps that take them in and out of the 100,000 sqm ExCeL centre. From the air, part of the circuit – a double hairpin section around Turn 10 – also coincidentally maps out a large ‘e’ shape. 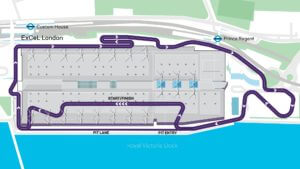 This year’s event will signal more than five years (1,847 days) since London last hosted top-flight international motorsport. Prior to those Formula E races in Battersea Park, the last time racing took place in the capital was back in 1972 at the now disused Crystal Palace Race Track. Previous winners of the Formula E race staged at Battersea Park include Sebastien Buemi, Nico Prost – son of four-time Formula 1 World Champion Alain – and Britain’s Sam Bird. The high-profile event has attracted the likes of Will.i.am, Sarah Ferguson, Sir Richard Branson, Luke Evans and former London Mayor and now Prime Minister Boris Johnson – the latter taking to the wheel of the Formula E car back in 2015.

Speaking ahead of the event, Formula E CEO Jamie Reigle said: “After such a hiatus, we’re very excited to bring world championship emission-free racing to London. With seven drivers, several teams and Formula E’s own operations all based in the UK, it is a hotbed for motorsport and the most eagerly anticipated event of the calendar. It is also a key opportunity for us to bring climate change to the forefront of people’s minds as, in addition to the race being exactly 100 days until COP26, the London Borough of Newham has the highest concentration of air pollution in the city – something we all must work together to address.”

The 2021 Heineken® London E-Prix takes place on 24 and 25 July at ExCeL London. For more information on Formula E visit www.FIAFormulaE.com