Fruit farmer John Busby spends most of his days driving tractors at four miles per hour. But he believes that if you work hard, you should find time to play hard. John spends his weekends reaching speeds of up to 120mph competing in the 450 4-Stroke class on a Silverstone chassis with a tuned KTM engine, competing in the BSRC and Motorsport UK British Superkart Championship.

Ahead of our special British Superkart Grand Prix video, which is coming soon on our social media channels, John was featured in the October edition of Revolution. Here’s a glimpse into what he had to say.

How did you get into motorsport and when did you start?

I started in short circuit karting when I was about 25, and a couple of years later, I joined a team to compete in endurance kart racing throughout the UK. I had a break when I had a family but then got back into it again. After running a pro kart and then a 125 Rotax kart, I found I was too old to compete with the young kids. I was going to quit, but my mechanic, Tom Hatfield, suggested I try Superkarting. I went to watch an event at Darley Moor, applied for my licence, took my ARKS (Association of Racing Kart Schools) test and in 2018, brought my first superkart.

How did you get involved in fruit farming and what do you do?

My family has farmed for generations. I now manage the farm at Billington, near Stafford, with my wife, Helen. We were once a more traditional farm, with dairy cows and arable land and pick-your-own fruit in the mid-1970s. Over the years, the decision was made to concentrate more on the fruit, so the cows were sold, and the arable area was reduced. This year we will sell 1,250 tonnes of fruit, consisting of strawberries, raspberries, blueberries and cherries. Our picking season starts in late April and finishes in late November, and the fruit is all sold to major supermarkets. We employ up to 180 people in peak season. 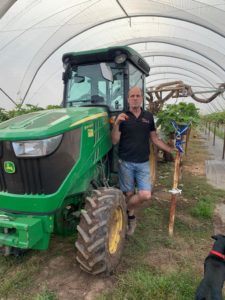 What is the one thing you love most about motorsport?

So many things! I love the adrenalin rush when you are waiting for the lights to go out and the race to start. I love getting the opportunity to race on some of the best and challenging circuits in Britain. Superkarts is particularly fun because the racing is close, speeds are high, and there is far more overtaking than some other race classes. It is also a great social experience. Everyone in the paddock is friendly and helpful, and I have met many new friends, with an age range from 18-70, so it is open to anyone.