Out In The Field; Fish and chips, bluebells and corkscrews

The motorsport community came alive over the weekend with diverse mix of activity across the UK. From eating fish and chips at Aberdyfi, driving around the bluebells and riding the corkscrew at Cheltenham Racecourse, we look at the wonderful world of club activity this weekend.

Fish and chips at Aberdyfi

Each year the Caterham and Lotus Seven Club’s South Wales Area organises a run for Club members from Chepstow to Aberdyfi, culminating with Fish and Chips on the seafront.

A favourite event for the community, 183 vehicles, gathered first thing on Saturday morning at the Piercefield Inn carpark in Chepstow.

Numbers were widely reported to grow as the day went on.

“Just got back to Birmingham with sore cheeks from all the smiling,” commented Billy Scrimshire on the Caterham and Lotus Seven Club’s Facebook page. “Now to brush the flies off my teeth…”

On the page, Nigel Cronin added, “What a fabulous day. Super route on the best UK roads I’ve driven to date. Took the direct route back to Oxford via Rhayader and it was made for Caterham’s. Thanks for the organisation and I’ll be back (spoken in Arnie voice).”

Walker’s Quality Fish & Chips was the fish and chip shop of choice for the Caterhams. How their fryer coped with a hungry pack of Caterham and Lotus Seven Club members has gone unreported!

In amongst the bluebells 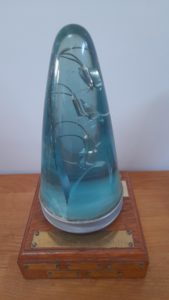 750 Motor Club held their Sporting Trials in amongst the bluebells at Earlye Farm in Sussex.

According to the Woodland Trust, bluebell’s sticky sap was, “once used to bind the pages of books and glue the feathers onto arrows, and during the Elizabethan period, their bulbs were crushed to make starch for the ruffs of collars and sleeves.”

In the 750 Motor Club Sporting Trials context, their usage is somewhat different as Kevin Judd, Secretary of Meeting expressed, “They make an exceptionally slippery surface as their sap is horrible and slippery as…insert your own adjective!”

Since 1974, the participants have been competing for a resin encased bluebell trophy that was first won by Bill Hicks, who competed just weeks until his passing in 2021.

The bluebell’s slippery sap provided plenty of a challenge to the 14 competitors and the 2022 trophy was awarded to Phil Haines. Haines retains the trophy he shared three ways after an inseparable tie in 2021. 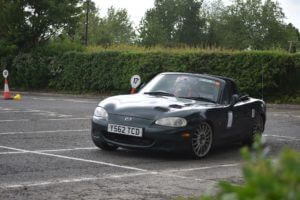 Corkscrew by name, corkscrew by nature with the course weaving and winding around the carpark, coupled with great views of the Grandstand and racecourse

Four tests took place around the car park, with the usual best two runs from three counting. The event was a round of Club Championship with the addition of Cotswold Motor Sport Group (CMSG), Association of West Midland Car Clubs (AWMMC) Regional Championships.

From the off, Sixty & Worcestershire MC club member Gary Ridgway took a one second lead over Steve Conner (AWMMC), with fellow club member Tom Johnson three seconds back. This set the pace for the rest of the day, with Ridgway keeping up the pressure throughout and Phil Oliver keeping within 12 seconds of the leader, Liam Rollings rounded out the top five places some 19 seconds adrift.

The PCA was convincingly won by Andy Warren, having pulled out a 20sec lead from the other competitors.

Haydn Marks took out a class win in his Volvo V50 and shared his last run on YouTube. See below:

Most Entertaining drive, voted by the Timing Marshalls – Haydn Tindal

Sixty and Worcestershire Motor Club’s next AutoSOLO/PCA at the Racecourse will be 16 October, again a qualifying round for the CMSG and AWMMC Regional Championships, with the BTRDA joining the event.

All the club events are detailed on the club website – www.sixtyworcsmc.co.uk.

Got a story you want to share? Get in touch with the content team at Motorsport UK HERE.