Jessica Edgar and Ella Stevens have been selected to participate in the senior category of the new season of the FIA Girls on Track – Rising Stars programme for the second year running. Joining the two girls to contest the junior category is Skye Parker. In an exciting development for this year, the programme’s collaboration with the Ferrari Driver Academy has been expanded to provide a long-term development pathway for junior drivers in karting and senior drivers qualifying to race in Formula 4.

The programme reviewed 71 FIA Girls on Track – Rising Stars applications from 28 countries across five continents to decide the 14 girls participating in each category ahead of the opening three-day shoot-out at the Circuit Paul Ricard on 21-23 October 2021.

Ella, 14, is already carving out her future in motorsport, having achieved numerous accolades in her short career to date. The double LGM Privateer Champion became the first female to qualify in Pole Position at the British IAME Cadet Kart Championship and made it through to the final 12 in the inaugural FIA Girls on Track – Rising Stars season.

Jessica, 16, represented Team UK in the 2019 FIA Motorsport Games and came through to win both finals at the 2020 British Karting Championship after overcoming problems in the heats. She is also part of the Motorsport UK Academy programme, which equips the UK’s most promising young drivers with the knowledge, skills and attitude needed to maximise their performance.

Skye, 10, is the 2018 Downforce Keir Millar U13 Racer of the Year and FIA F1 Future Star. She is currently competing in the 2021 Wera Tools Motorsport UK British Kart Championship alongside the Little Green Man Series, following a stint in Portugal the previous year.

Hugh Chambers, Motorsport UK CEO and FIA Women in Motorsport Commission UK Representative, commented: “It is fantastic to see Jessica and Ella back as strong contenders from the UK alongside Skye in the second season of the FIA Girls on Track – Rising Stars programme.

“Motorsport is one of the only sports where males and females can compete on a level playing field. That is why Motorsport UK has strived to be at the forefront of actively inspiring future women in motorsport, from being behind the wheel to pursuing STEAM careers, and we are proud to see more females entering our sport every year.

“We wish Jessica, Ella and Skye the very best of luck next month and will be following and promoting their progress with great anticipation.”

Without further ado, it’s time to meet the three talented drivers selected from Motorsport UK’s nominations who will be flying the flag for Britain at the opening round next month. 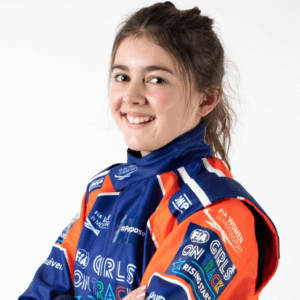 Fifteen-year-old Ella Stevens is already carving out her future in motorsport, having achieved numerous accolades in her short career to date. Ella has been karting since 2013 and, after learning the ropes, went on to compete in the Bambino Championship the following year, where she finished 8th overall in her first full season.

At the end of the 2015 season, Ella was able to move into the next class, where she went on to become the first female to qualify in Pole Position at the British IAME Cadet Kart Championship. But it was in 2018, Ella’s name became recognised up and down the paddock after she became a double LGM Privateer Champion and going on to race for Fusion Motorsport.

The young female driver, supported by Alice Powell, competes in the Little Green Man Championship alongside 60 drivers in the X30 Mini class. 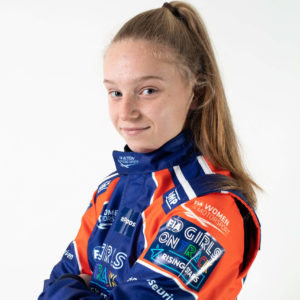 Motorsport runs through the veins of Jessica Edgar as she follows in the karting footsteps of her Grandad, who was British Champion back in 1977. Her Dad was later crowned champion in 1997 and 2003, while Jessica’s uncle was also champion in 2002-3 and 2005-6 as well as a multiple GP and O plate winner.

After achieving the coveted championship title in her debut season in the Cumbria Kart Racing Championship, Jessica represented Team UK in the 2019 FIA Motorsport Games, participated in the 2020 FIA Rising Stars and made the Motorsport UK Academy Team UK Futures – Year 1 selection.

One of the proudest moments of her career to date was winning both finals at the British Karting Championship.

The 2018 FIA F1 Future Star Skye Parker is already mixing with some of the sport’s elite personalities, including two-time Formula 1 World Championship driver Fernando Alonso during an interview for Blue Peter ahead of the British Grand Prix.

Skye is the 2018 Downforce Keir Millar U13 Racer of the Year and is currently competing in the 2021 Wera Tools Motorsport UK British Kart Championship alongside the Little Green Man Series, following a stint in Portugal the previous year.